Laughing through hard times in Cuba 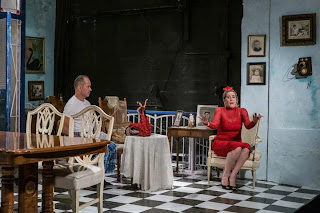 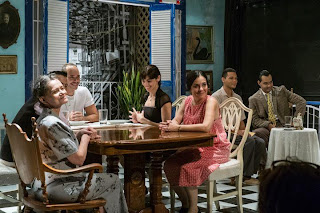 Laughing through hard times in Cuba


Like many people today, the middle-aged characters of the Cuban play, Contigo, pan y cebolla, must confront the reality of increasing necessities and shrinking salaries.

Written in 1962 by Cuban playwright Héctor Quintero, the play occurs before the Cuban Revolution. The phrase Contigo, pan y cebolla is the equivalent of the English, “Together, through thick and thin,” and it explores the toll that economic scarcity takes on the hopes and aspirations of ordinary people. The comedy, presented at Akuara Teatro, in Spanish with English supertitles, is a co-production with Teatro La Má Teodora and the University of Miami’s Cuban Theater Digital Archive.

Luis Suárez’s superb set design plunges the viewer into a typical Cuban living room, decked out with religious iconography and kitsch. A lace doily decorates the back of a rocking chair. Family photos and representations of Cuba’s patron saint, Our Lady of Charity, and Jesus clutter the walls.

Carlos Alberto Pérez and Yvonne López Arenal are a riot as the cantankerous couple, Anselmo and Lala. Like two geysers that erupt intermittently, their comedic timing is spot on. The play centers on Lala’s desire to own a refrigerator — the family still relies on blocks of ice. López Arenal is hilarious as Lala, whose obsession borders on the absurd. As Anselmo’s much-awaited pay raise never materializes, Lala schemes to get the refrigerator, but when she has to return it, she becomes desperate to keep up appearances.

When neighbor Fermina (hilariously portrayed by Mabel Roch) offers to take carry out her trash, Lala refuses out of fear Fermina will realize the family can only scrounge up watery soup and fried eggs for dinner.

Anselmo and Lala’s more laid-back adolescent children, played by Liset Jiménez and Andy Barbosa, temper their parents’ high-pitched histrionics, and Micheline Calvert is a stand-out as Fefa, Anselmo’s elderly relative who lives with the family. Fefa has little dialogue, but Calvert’s face speaks volumes. From one instant to the next, she can project indignation, cunning, annoyance and humor.

Director Alberto Sarraín has preserved the play’s original three-act structure with two small intermissions. In a time of diminishing attention spans this may seem risky, but it works. The space’s cozy feel and the brief intermissions give audience members the chance to chat between acts.

Although Contigo is steeped in Cuban colloquialisms, jokes, and profanity, the genuine characters and their hilarious way of dealing with life’s hard knocks make it very entertaining. 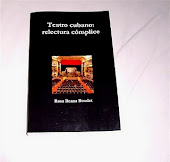 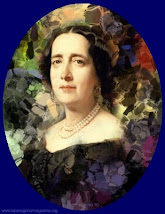 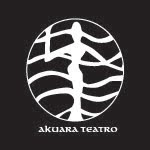 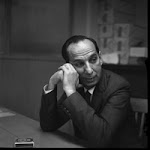